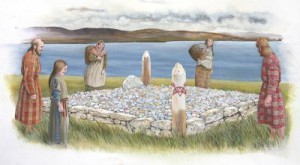 This artist’s impression of the Pictish Square Cairn on Berneray represents a scene from around 700 AD. There are only two other similar cairns in the Outer Hebrides, although they are more common in the Eastern Mainland and the Northern Isles. The one here – described in Archaeology Hebrides – is about a three metres square in size and consists of stones brought from several parts of the island. It was discovered – with no bodily remains – when excavations were undertaken for the ferry terminal.