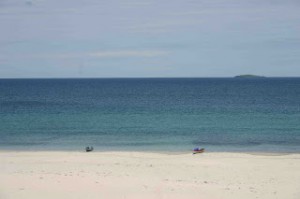 A Beach on Berneray

Simon Willis has included a reference to, and this image of, Berneray, in his blog that focuses on sea kayaking. He accounts for the criss-crossing of the Sound of Harris and then anticipates moving on from the beach which, he claimed, was as good as it looks. The destination was the Monachs. This is not the sort of self-propelled journey for everyone, especially when the margins of Berneray look so enticing. Let us hope he was successful in reaching an Hebridean outpost that has been de-populated since the start of the Second World War.