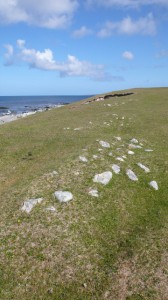 Stones laid in a pattern in order to dry seaweed

Walking around Berneray gives many vistas – for although only three miles long and two miles wide, it does have an accessible coastline that’s virtually ten miles in distance.  One is to be found in the south-west corner at Braighe na Ceilp where, in the 1840s, there was a flourishing trade in the production of kelp. Stones (pictured here) were laid in a rectangular pattern in order to dry seaweed on an exposed part of the shore.

The population of the island rose to 712 in 1841, but suddenly the industry declined, coupled with ‘clearances’, and by 1851 the decline to 410 was severe. The ‘Stop / Go’ nature of economic development is evident in this now neglected corner of the island.

It would be interesting to compile a list of the ways in which people have made (or tried to) make a living on an island such as Berneray during, say, the last 200 years. Has the coming of broadband, which has revolutionised working practices, brought more livelihoods? Anyway, it’s a far cry from seaweed collecting.