The Gatliff Hebridean Hostels Trust launched its Howmore Appeal in June 2013 with a target of £47,000.

The Chairman announced in March 2016 that the target had been reached and that the appeal would close. The appeal document is archived  here

If you would like to know more, there is further information here. You can also read here what hostellers and donors are saying about staying at Howmore. 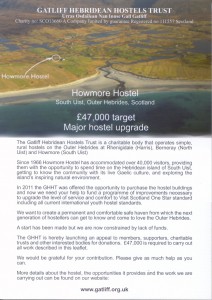