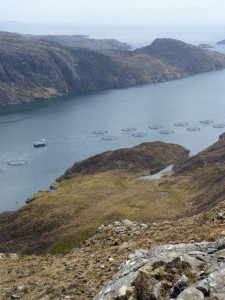 Nostar, in the Foreground, on Loch Seaforth 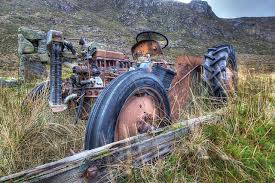 Settlements on the shores of islands were often once thriving, but with road improvements they became cut off and ready for abandonment. Up the Loch Seaforth coast from Rhenigidale was Nostar, and here its owner considered that the levels of fertility were sufficiently high for cultivation by tractor. This piece of machinery remains, but is going to disappear as the salt air and rust corrodes it. Had Rhenigidale relied on its sea-route and footpath, it would probably have gone the same way. Then in the 1980s efforts were made to have road access created and at the end of that decade a track for four-wheel-drive vehicles and then a metalled highway were completed. The place is thriving and people have moved in rather than moved away … including hostellers who are temporary residents to be measured in several hundred a year!