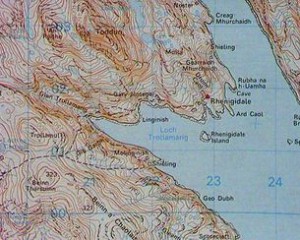 To the west of Rhenigidale, on the footpath towards the zig-zag lies Gary-Aloteger. Here’s something of its history: ‘Notes NB 2209 0184 A walkover survey was undertaken on 10 May 2009 in connection with the development of a potential woodland. Three clusters of buildings and related features associated with the small township of Gearraidh Lotaigear were identified. At NB 2209 0174 on the shore are a stone shop and a half-boat-shaped stone store near a landing place. A small early 20th-century corrugated iron and concrete house stands slightly uphill. On the E bank of Abhainn Lotaigear around NB 22095 01840 is a group consisting of one modified blackhouse and two other buildings. One less well preserved building may represent an earlier phase of occupation. On the W side of the river at cNB 22058 01820 are a gable-ended blackhouse and outbuilding to the SE of a trackway. A further modified blackhouse structure lies on the other side of the track. Sections of stone and turf dykes and areas of lazy beds were also noted.’