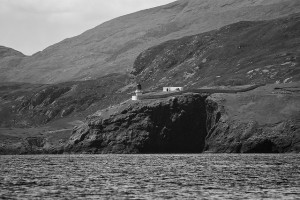 It’s more or less a straight line from Howmore across South Uist to the Usinish Lighthouse, but it needs reserves of energy and a degree of expedition equipment to get there. The route would involve the descent to the east of Ben More, Hecla and Corodale and the deserted glens with their abandoned dwellings, shieling huts and souterrains (underground shelters and stores). The reward would be finding the brick-built Stevenson lighthouse, constructed in 1857, with enclosure walls and latrines still surviving. Spare a thought for the ‘keepers living there until automation arrived in 1970.