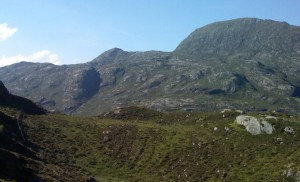 Here’s an account from a BBC website: ‘A view across Loch Trollamarig from above Molinginish. If you look closely left of centre, you can see a shadow cast against the hillside which looks like the profile of the face of a man with a prominent nose. The protruding ridge just to the left of this is what produces the shadow in the evening light. This ridge, marked on the OS map as ‘Kerram’ is known locally as Sron an t-Siorraim (The Sheriff’s Nose). The reason for this name is only apparent from the Molinginish side of the loch and only in the right conditions. Who the sheriff was nobody can tell me – whoever he was he had a nose to be proud of.’