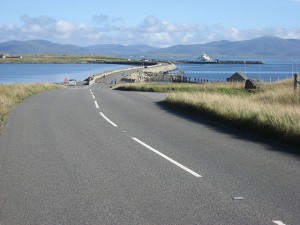 The last days of 1998 saw a revolution in the ways of life on Berneray. This was when the £6.6 million causeway unofficially opened and the small ferry sailed for the last time. CalMac services to and from Leverburgh, South Harris, became the crossing to the north and the road on the causeway, of course, provided the link to the south. There was then an inter-island chain, direct rather than circuitous. The acclaimed new feature was officially opened by the Prince of Wales on Thursday 8 April 1999. He had several links with the island, including a long stay to learn about crofting from the late ‘Splash’ McKillop and his wife, Gloria,