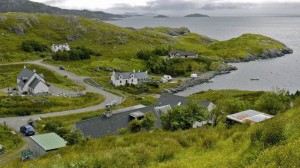 Rhenigidale from a high point

Despite its remoteness, Rhenigidale became in the forefront, at least from the latter part of the 20th Century, of telecommunications. Although at one time it had just one phone, that was linked to the wider system by radio which transmitted the signal to Gairloch, on the Mainland, and on to the exchange in Ullapool. Now it has broadband connections. A written view of the past is to be found in the Domesday log for 1986 and a visual view of the village, from a point closer to the mast, is shown above. Explore by scrambling up and getting another view, of The Shiants in the distance.