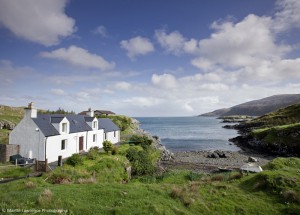 The crofthouse, formerly of Mrs Morag McInnes, which once housed the Rhenigidale public phone

Here’s an extract from Secret Scotland Forum: ‘It wasn’t the last manual telephone – it was ‘Rhenigidale 1’  in the village of Rhenigidale on the Isle of Harris which didn’t get a road connection until the early 1990s. With the coming of the road, BT laid a cable to Rhenigidale and on 5 March 1990, the UK’s last single digit phone number disappeared. Rhenigidale 1 was what was known as an ‘attended call office’ – i.e. you went to the place where the phone was – in this case the croft of Mrs Morag McInnes – the operator (in Inverness) connected you to the number you required. At the end of the call, ‘the attendant’ – Morag – was called back by the operator and advised of how much money to collect for the call.’