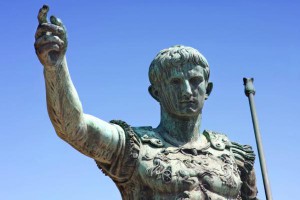 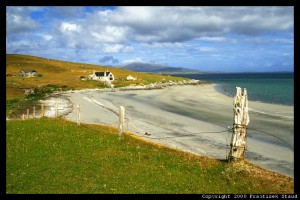 These images have a certain antiquity about them. Julius Caesar introduced the Julian Calendar in 45 BC and  these fence-posts on a Berneray beach – from Phototravels – have weathered many 20th Century storms. A feature of the island has been the continued recognition of aspects of the Julian variation long after the introduction of the Gregorian Calendar in 1582. So New Year’s Day continues to be celebrated here by some people on 12 January. In 2007 a DVD was released called The Old New Year – a living tradition on Berneray. It considers Oidhche Challhainn – New Year’s Eve or Night of the Calends – which is rare, but not unique. It is part of a way of life still recognised on Foula in Shetland, Burghhead, on Scotland’s East Coast and in the Gwaun Valley, north Pembrokeshire, Wales.

The landscape of Berneray shows many relics – including stone circles, sacred sites and indications of Viking settlements as well as historical buildings. The causeway and broadband have brought 21st Century innovations, but some features remain back in time.